There are over 5.5 million women in North America who are affected with this disease, and they are mostly women in their 20’s and 30’s.

The uterus has a tissue lining on the inside of the uterus called “endometrium”. It makes a nice bed for a fertilized egg. Once the egg implants itself into the endometrium, “pregnancy” occurs. However, when pregnancy does not occur, the endometrium starts breaking down and shedding (this is called “menstruation”) and then the body starts making a new lining for the next chance of pregnancy. Women have a cycle of growing and shedding of this endometrial lining every month. This endometrium is supposed to exist only inside the uterus, however, the endometrial tissue can sometimes migrate to other places in the pelvic 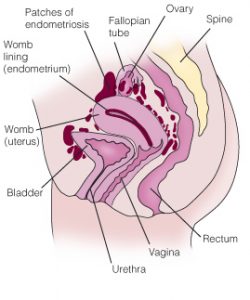 cavity such as on the ovaries, fallopian tubes, the ligaments supporting the uterus, the area between the vagina and the rectum (known as Pouch of Douglas), the outer surface of the uterus and somewhere in the lining of the pelvic cavity (called “peritoneal membrane”). When this happens, it is called endometriosis.

The misplaced endometrial tissue acts as it is supposed to do in the uterus, it grows, breaks down and sheds with the menstrual cycle, meaning there occurs a bleeding in the pelvis and that the blood irritates the peritoneal membrane causing severe pain as well as scarring.

The common signs and symptoms of endometriosis include:

The cause is not fully known. There are several theories about when endometrial tissue may be found outside the uterus. One theory that is mostly supported is that endometrial tissue migrates by the backing up of menstrual blood into the fallopian tubes and the pelvic and abdominal cavity during periods. This is called “retrograde menstruation”. When observing ectopic endometrial tissue is observed by laparoscopy, its purple coloration is clearly visible, which signifies blood stasis. In Chinese Medicine, there is a famous dictum, “if there is free flow, there is no pain; if there is pain, there is no free flow”

According to Chinese medicine, there are many theories to how women can develop blood stasis leading to endometriosis:

How is endometriosis diagnosed?

Endometriosis is suspected based on symptoms (especially severe menstrual pain), physical examination including recto-vaginal exam, imaging tests such as ultra sound and MRI; however, direct inspection of the inside of the abdomen and pelvis with biopsy by laparoscopy (or surgery) is the only method to confirm the diagnosis of endometriosis.

How is endometriosis treated by Western Medicine? 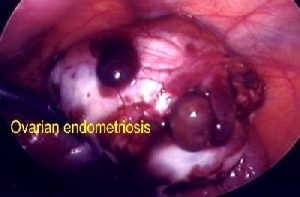 Endometriosis is treated by medication and/or surgery; however, there is no medication to treat it completely. What western drugs do it alleviate pain (pain killers such as non-steroid anti-inflammatory drugs; NSAIDs), or inhibit ovulation so that there is no menstruation and bleeding from the migrated endometrial tissue (by gonadotropin-releasing hormone analogs, oral contraceptive pills, or progestins etc). They are more likely to mask symptoms, rather than treating the disease itself. On the other hand, surgery can be done to remove implanted endometrial tissue for long term pain relief. Surgical methods include laparoscopic surgery, and for women who do not plan on childbearing, a radical surgery such as hysterectomy with oophorectomy (removal of the uterus and both ovaries) along with removal of the endometrial tissues may be chosen. However the former does no guarantee alleviation of pain, while the latter effectively puts the woman into immediate menopause.

How is endometriosis treated by Chinese Medicine?

Since Chinese Medicine views endometriosis as blood stasis, Chinese Medicine Practitioners treat the root causes of blood stasis, The main treatment plan would be to invigorate the blood, break up the blood stasis, regulate menstruation and stop pain. This treatment should be done with mainly Chinese herbs, according to the phases in the menstrual cycle. Before and during the period the focus is on removing the blood stasis; during the rest of the cycle the accompanying conditions are treated. Acupuncture is also useful, especially in the beginning of treatment, when the patient suffers from severe pain during periods. It would be impractical to take western drugs and Chinese herbs for endometriosis simultaneously. Western hormonal drugs are prescribed to inhibit ovulation so that the patient won’t have menstruation, while Chinese herbs are used to regulate menstruation without interfering with the natural menstruation cycle.

This message is only visible to site admins
Problem displaying Facebook posts.

Error: Error validating access token: The session has been invalidated because the user changed their password or Facebook has changed the session for security reasons.
Type: OAuthException
Code: 190
Subcode: 460